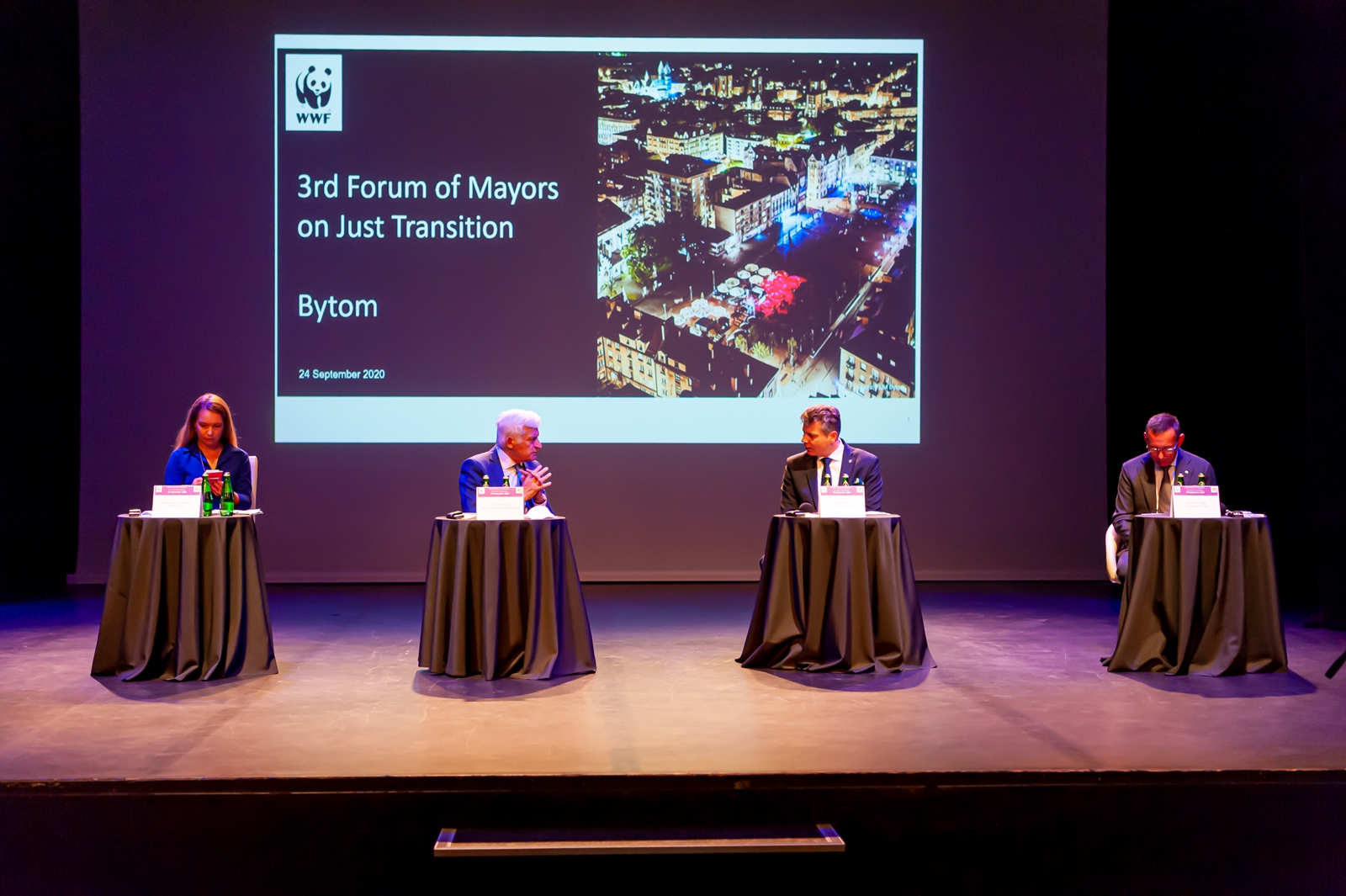 Summary of the 3rd Forum of Mayors

The mayors of European coal municipalities met at the Third Forum of Mayors for a Just Transition in Bytom. This edition of the Forum was unique – due to the pandemic and was organised in a virtual formula. Nevertheless, more than 100 people took part in the event, including 40 mayors from Poland, Ukraine, Bulgaria, Germany, Greece, Bosnia and Herzegovina, Czech Republic, Slovenia and Romania. Is Europe closer to a just transition of mining regions?

The host of the event – Mr. Mariusz Wołosz, Mayor of Bytom – talked about the unsuccessful transformation experiences of his city and the challenges facing the decarbonising EU economies. The event included a debate with the participation of, among others, Professor Jerzy Buzek[1], and workshops in subgroups where mayors and employees of regional governments could share their experiences on the transition process. What did those participants share?

ON THE WAY TO CLIMATE NEUTRALITY

Farewell to coal is a challenge not only for the Polish economy. Several EU countries are facing this challenge. This year’s talks at the Forum of Mayors focused on preparations for the launch of the Just Transition Fund, set up by the European Commission to support coal and industrial regions in building a secure future. As Professor Jerzy Buzek noted:

– A well-conducted mining transformation is an opportunity for many European economies, where coal still plays an important role as an energy material. (…) If we are to succeed with the European Green Deal, we must succeed with a Just Transition. It is fundamental for every European, not just those depended on the coal industry. This really is our common problem. (…) The Just Transition Fund itself is an expression of support for citizens living in areas which are going to undergo the most profound changes. This fund is an important element of the European Green Deal.

Normunds Poppens, the European Commission’s Deputy Director-General for Regional and Urban Policy, was invited to discuss and present the state of preparation of the process in the EU. Poppens stressed the serious threat of climate change. Countering it is, in his opinion, one of our most important responsibilities. Therefore, Normund Poppens pointed out the actions taken by the European Union to combat the climate crisis. In addition to the European Green Deal or several ambitious climate targets, he has identified a plan for a just transition as one of the most important but also very difficult projects. As he said, its greatest challenge is not to leave any country, region or person behind. The Just Transition Fund is much more than money for mitigating the effects of transformation – these are funds for reorganising the labour market towards a sustainable development of regions (both urban and rural), supporting green businesses, workers, but also local authorities and the local community. However, a detailed action plan is needed, created with the participation of all stakeholders, including NGOs dealing with the topic of just transition, such as WWF.

NGOs are one of the stakeholders supporting the process in many countries. Above all, they support transparent and bottom-up planning. As the CEO of the WWF Poland Foundation, Mirosław Proppé, said:

– Planning the mining transformation is one of the most important tasks that we are facing. It is necessary for the cities to be able to benefit from this transformation effectively. However, in order to plan any programmes or projects, it is necessary to give an exact date for the departure from coal. (…) Transformation projects cannot be ideas “from behind a desk”: they cannot be brought in a briefcase, from Warsaw. Everyone should be involved in the process of finding new solutions: local and regional governments, local communities, social organisations and NGOs.

The need to involve local governments through a bottom-up approach, and to identify their needs and barriers to development were also clearly heard in all voices. The needs are also often linked to the lack of decisions at the national level, as the speakers mentioned. It also became clear quite quickly that building strategies to stimulate economic growth with a bottom-up approach is not easy. To this end, the countries involved are bringing cooperation at local government level closer. A just transition is part of the international effort to achieve EU climate neutrality by 2050 at the latest.

Local government officials themselves, among other things, spoke about the need to finance both the so-called hard projects (related to energy, revitalisation or infrastructure) and the so-called soft projects (health, education, tourism) from the Just Transition Fund. As mayors stressed, both types of these projects must be treated with equal attention. What should be given importance? It was pointed out that entrepreneurs will not invest in a region where there will be no places for families and opportunities to spend time after work for their employees. It is also not a matter of strongly supporting old business models, but of seeking new ones. Attention was also drawn to the mistakes made during restructuring processes in many regions of Europe, including Upper Silesia, for example.

As Mariusz Wołosz, President of Bytom, explained during the inauguration of the event:

– Bytom is an example of a city that has been particularly affected by mining restructuring processes. Today we are meeting representatives of cities from all over Europe, which are struggling with the same problems as Bytom. Our aim is to share our experiences in order to work together to find solutions to mitigate the effects of the mining transformation in Europe. It is not possible to carry out the process of mining transformation effectively without the participation of local authorities – it is the local authorities that will be the pillar of a just transition, because they are the source of information about the real needs of the inhabitants.

THE MAYORS’ FORUM FOR JUST TRANSFITION

The Forum of Mayors is an international platform for the exchange of experience and knowledge dedicated to the mayors of EU coal municipalities, which was created with the support of WWF, within the framework of the Regions Beyond Coal project. They included their demands in the Declaration for a Just Transition signed by 61 coal municipalities. The inauguration of the Forum took place in 2018 in Kozani – in Western Macedonia, a region of Greece. The second edition took place a year later, in the German town of Weisswasser, a lignite mining region. The next meeting is planned for September 2021 in Bulgaria.

See a video „We are from here!” – a documentary about Just Transition in Poland: https://www.youtube.com/watch?v=BOiwCZVarFk